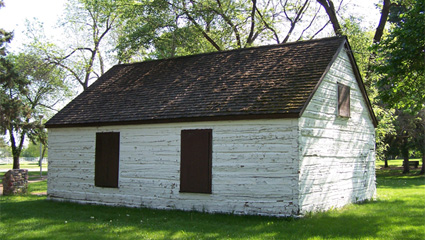 The Nisbet Church was constructed in 1872 by Reverend James Nisbet and was used as both a church and a school.  We believe it to be second oldest church in Saskatchewan and the oldest school between the Red River and the Foothills of Alberta.

The Nisbet Church, the first Presbyterian Church and School in Prince Albert, is a non-designated heritage property once located in Kinsmen Park in the City of Prince Albert. The building comprises a rectangular one-room, hewn-log structure constructed in 1872 with dimensions of about 30 feet by 21 feet.

The heritage value of this building lies in its association with the founding of Prince Albert and its association with the events, places and/or people which have made a lasting contribution to the economic, social, cultural and political history and development of Saskatchewan.  Reverend James Nisbet, considered the father of Prince Albert, established the Presbyterian Mission in 1866 over concern for the welfare of First Nations and Métis people, who were dealing with significant changes in the fur trade and a declining buffalo hunt. Nisbet’s emphasis was on education, religious instruction, and agriculture. As such, he focused on planting crops and constructing buildings, including the Mission House in 1866-67 and this first purpose-built church in 1872. (Letter from James Nisbet, July 8, 1872: “We have been occupying our little church for the last three Sabbaths.  The walls were put up just before seedtime, and now we have only some plastering to do to it. ….. It is a neat building, with open belfry-shaft and vane.  It contains 120 sittings, and more may be provided when required.”)

Heritage value also resides in the building’s status as the oldest remaining building in Prince Albert. Constructed in 1872 by Reverend Nisbet who was also a carpenter, it served the mission as a church until 1881, when a new brick church was built on what is now Central Avenue.  It continued to serve as a school until new school buildings were erected in 1884.  This building also is believed to be the second-oldest extant church in Saskatchewan.

Further heritage value lies in the building’s vernacular construction which reflects a tradition important to the history and development of Saskatchewan. Constructed of dove-tailed, hewn square logs, it is a simple, rectangular building with hip roof that reflects the local construction materials and methods available at the time.

Disassembled, relocated, reassembled and somewhat refurbished at the new location at the north end of Bryant Park (now Kinsmen Park) in 1932, it is one of only two buildings that remain from Prince Albert’s settlement years.

While the early history of the building is well documented in Nisbet’s letters and in pioneer’s references in reminiscences, documentation for the original location of the building is uncertain at best.  No definitive photographs of the building on the original site have been found.  However, the letter on May 19, 1931 from the Imperial Bank, donating the building and asking the Historical Society to remove it forthwith, identified the site as being: ’Log building, Lots 9-11, inclusive, Blk. B., R.L. 79’, which would place the building east of 1st Avenue East.  From the City tax records for 1929-1937 it seems very likely that R.L. 79 should have been R.L. 77 (the Bank was not the taxpayer for those lots in R.L.79, but was listed as the taxpayer for those lots in R.L. 77).   R.L. is River Lot, from the 1878 survey, and the Presbyterian Mission was on River Lot 78, centred on what now is Central Avenue, and 1st Avenue West is the division line between River Lots 77 and 78.

The Nisbet Church was dismantled in June 2018. The building had deteriorated and could not easily be restored.  The salvageable material has been stored until funding is available to have it rebuilt. Every attempt has been made to save the historically relevant parts of the building.  When rebuilt, the Nisbet Church will be located west of the Historical Museum.

In September 2019, the Prince Albert Historical Society started a fundraising campaign to reconstruct the Nisbet Church and Blockhouse on the riverbank near the Historical Museum. More information is available on our Home Page or this information sheet.  All donation amounts are welcomed; donations over $20 will receive a tax receipt.

Please consider donating to this project using our GoFundMe page or contact the Historical Society: