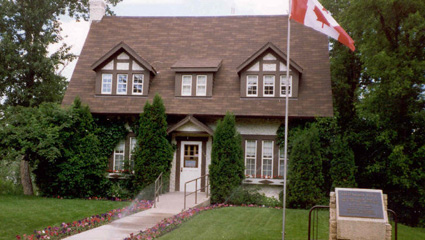 The John and Olive Diefenbaker Museum building was constructed in 1911 for Harry Jaffray, the manager of the local Imperial Bank of Canada. He and his family left Prince Albert by the end of World War I.

In 1947, John and Edna Diefenbaker purchased the home, living there until Edna’s death in 1951. John married Olive Palmer in 1953 and they lived in the house while in Prince Albert until 1957. When Diefenbaker became Prime Minister their principal residence was in Ottawa.  During this period they rented the house until donating it to the City in 1977 for the purpose of becoming a museum. The museum opened in 1983 with help from the Diefenbaker Canada Centre in Saskatoon.

It wasn’t until 2014 that the house became a municipal heritage site.  In 2019, the house was dedicated as a National Historic Site on the 40th anniversary of Diefenbaker’s death.

John Diefenbaker was Canada’s thirteenth Prime Minister from 1957 to 1963 and was the Prince Albert riding’s Member of Parliament from 1953 to 1979. The house is furnished with artefacts from the Diefenbaker’s residence in Ottawa; however there are a few items that were originally located in the Prince Albert house.

Hours: During the summer opening season (mid-May to August) this museum is open daily and visitors are provided with a guided tour of the house.  From September to mid-May (our off-season period), visits to this museum must be arranged.  Please contact the Historical Museum during regular business hours to set up an appointment for a tour.